Whoa, ok…so, it’s already October…and it’s been October for a few days…How did that happen?

What happened in September?

I had a challenge:

Sister was to give me some books to read…which she did. Gladly. 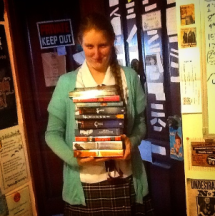 Did I read any of the books sister asked me to read?

So, what did I actually end up reading?

Armageddon Outta Here, by Derek Landy
The Next Together, by Lauren James
The Foretelling of Georgie Spider, by Ambelin Kwaymullina

And then I just reread the Raven Cycle, suffered feels and complained about uni assignments. I think I also reread Sinner at some point…

I bought some books:

Because You’ll Never Meet Me, by Leah Thomas
Queen of Shadows, by Sarah J Maas
The Fate of Ten, by Pittacus Lore
The Wrath and the Dawn, by Renee Ahdieh

I received some books:

The Next Together, by Lauren James

I won some books:

Cloudwish, by Fiona Wood (Thanks Emily)

But that’s not all that happened in September

Sister and I made a tower of books:

And to bring it down…we played Jenga with it…and we videoed it.

New seasons of Doctor Who, Scorpion and Once Upon a Time happened

I am LOVING the new season of Doctor Who…I love Peter Capaldi’s Doctor, and Missy is hilariously deranged.

As for Scorpion, I JUST CANNOT HANDLE THE FEELS RIGHT NOW! I JUST SHIP EVERYONE AND I NEED MY SHIPS TO SAIL AND IT’S NOT HAPPENING! Seriously, guys, I’m dying here.

And Once Upon a Time is back…FINALLY! After binging the entirety of seasons 3 and 4 back in July I have needed this in my life! I have seen the first episode of season 5 and *GROSS SOBBING*

So…what’s going on in October?

University is most unkindly taking up a great deal of time at the moment, so I’m not going to be posting very much, at all.

Which sucks. But, really, what can you do?

Anyways, I have some reviews that need posting, but that’s probably all you’ll see from me for a while.

7 thoughts on “Wait, it’s October? When did that happen?”