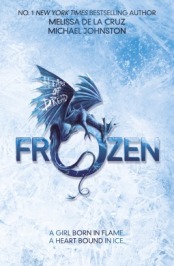 Release Date: 2 October, 2014 (according to netgalley)

A major new fantasy series from the New York Times bestselling author of Blue Bloods and The Witches of East End.

Welcome to New Vegas, a city once covered in bling, now blanketed in ice. Like much of the destroyed planet, the place knows only one temperature – freezing. But some things never change. The diamond in the ice desert is still a 24-hour hedonistic playground and nothing keeps the crowds away from the casino floors, never mind the rumors about sinister sorcery in its shadows.

At the heart of this city is Natasha Kestal, a young blackjack dealer looking for a way out. Like many, she’s heard of a mythical land simply called “the Blue.” They say it’s a paradise, where the sun still shines and the waters are turquoise. More importantly, it’s a place where Nat won’t be persecuted, even if her darkest secret comes to light.

But passage to the Blue is treacherous, if not impossible, and her only shot is to bet on a ragtag crew of mercenaries led by a cocky runner named Ryan Wesson there. Danger and deceit await on every corner, even as Nat and Wes find themselves inexorably drawn to each other. But can true love survive the lies?

Fiery hearts collide in this fantastic tale of the evil men do and the awesome power within us all. This is a remarkable first book in a spellbinding new series about the dawn of a new kind of magic

So, I liked it…but there are several issues I have with it.

My main issues are hard to explain without spoilers, but it had a lot to do with a lack of explanation. The world is covered with snow/ice (hence, Frozen), which was fine, but it wasn’t really explained why the world was like that. There was no backstory.

And then there was The Marked. It doesn’t really explain where they came from, all it explains is that they exist, and that they’re not accepted, even feared in society. In fact, there was this whole thing with magic that seemed to be going on in the background, but there was no explanation for any of it.

I mean, sometimes there’s too much focus on back-story and world building, but in this particular case, there simply wasn’t enough. There were all these references to ‘bigger picture’ stuff, but they were all mentioned in passing, as though they didn’t even matter…which made no sense, because it was the type of thing that really should have mattered.

Another problem I had was the relationships between the characters. It was somewhat inconsistent. I mean, some moments, they were going on about how long they’d been together, and how loyal they all were, but other times, they seemed perfectly fine with tossing each other overboard.

All this being said, I did enjoy this book. I liked the characters (ignoring some of the inconsistencies), and if you ignore the unexplained bits, the story was actually good. There was no “usually people would die if this happened to them, but because we’re the main characters, we’ll be fine” sort of thing going on, which I did like. I hate it when books go on and on about how difficult a journey will be, but then it’s actually pretty easy. And I was glad that didn’t happen here.

So, all in all, it was enjoyable. There were things I liked, and things I didn’t like, which is the way with most stories.
And, because I don’t feel like I have much choice in the matter, I’m going to sum up the story with one gif: